John, with his wife Pat, started Square Dancing in the early 1980s. They joined a breakaway group of the Hemel Hempstead Folk dance club that eventually became Tudor Squares. John joined the committee in 1988. He retired from the committee in 1995 having  served for seven  years. In 2002 they joined CD squares when it started. They both continued to support the Tudor Squares plus section on Mondays as well as venturing through the A1 on Fridays.

In 2009 they were both granted honorary life membership of Tudor Squares and CD squares honoured their support in June 2018.

By mid 2012 arthritis had taken its toll and John was unable to continue dancing, however he remained loyal and accompanied Pat while she carried on with her dancing. He was always cheerful and made welcome on the club nights.

Two of the club’s founder members, John and Pat Carey, celebrated their diamond wedding anniversary on the 20th August 2018 and continued to dance regularly at Plus evenings.  Pat made the club’s banner in 1987, which is still being used today and beside which John and Pat are standing in the picture.

As well as dancing themselves. John and Pat have encouraged new dancers, acting as ‘angels’ for Beginners, in fact doing so currently with the club’s latest group of new dancers.

Taken at a recent Plus session at Gadebridge 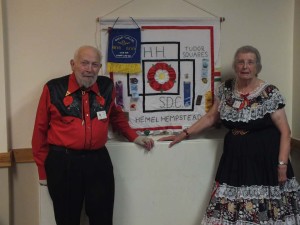